How the Railway made New Milton

The arrival of the railway in our area saw the birth of a new town in 1880’s.  The London and South Western Railway extended their railway from Southampton to connect to the Victorian seaside resorts of Bournemouth and Weymouth.  Prior to this there had been a railway known as ‘Castleman’s Corkscrew’ which went via Brockenhurst and Ringwood to Dorchester. The nearest railway station to our town was called Christchurch Road, later known as Holmsley.  This was not close enough to the village of Milton to make much impact.  1886 saw the building of the railway station in its current location. There were geological, and logistical reasons which prevented the railway line and station being brought nearer to the long established village of Milton. Next time you buy a ticket, look above the door of the Station Managers house, and you will see a plaque proudly bearing the date AD 1886.  The railway actually commenced operations in 1888 as there were delays caused by problems with the stability of the land, especially around the line at Sway which saw several landslips and some deaths amongst the navvies constructing the line.  Next time you travel from New Milton to Brockenhurst look at the landscape and spare a thought for the men who dug the cuttings and constructed the embankments by hand. 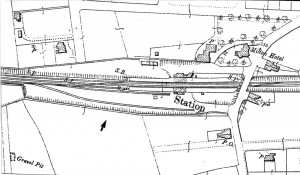 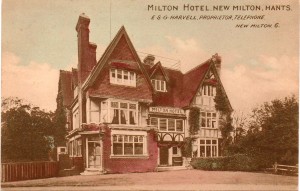 In addition to the hotel Mr Wyeth built a hall and two shops opposite the southern entrance to the railways station. The hall was used for concerts, meetings and dances. Hugh Wyeth also built himself a rather grand house on the corner of the cross roads in New Milton where the National Westminster bank now stands.  A rush for land developed and this was supplied by sales of land from Winchester College, Fernhill Manor and Milton Park estate. The first parade of shops were built and called ‘Bank Terrace’. These shops included a stationer and bookshop, a grocers, namely Misselbrook and Weston Ltd and a chemist shop run by a Mr W.E.Kirkman. 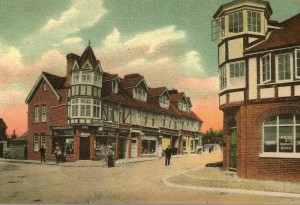 The Wilts and Dorset Bank opened a branch on the corner of Station Road and Osbourne Road. This is now occupied by Lloyds bank.  On the opposite side of the road, another parade of shops was built and this included a sub post office which took over from a smaller post office in what is now the building used by Williams Bridge garage. This new post office was run from 1895 by a Mrs Newhook.  It is believed that this lady was responsible for the name given to the railway station and to our town. Mrs Newhook called her post office, the New Milton post office to differentiate it from the post office by the Wheatsheaf public house in Milton village. A railway official was looking for a name for the new railway station and declared that if the name “New Milton” was good enough for the Post Office it was good enough for the railway. Thus the London and South Western Railway named the station New Milton. In 1900 the demand for housing and services led the West Hampshire water company to build our towns’ most famous landmark, the red brick water tower.

A  brickworks was started, which not only supplied building material for the construction of houses and shops in New Milton but also used the railway to send their bricks to the fast developing town of Bournemouth.

The railway advertised New Milton as an idyllic location to visit and stay, ‘Twixt New Forest and Sea’. I think you will agree from the attached advert that there was a certain amount of artistic licence used to lure visitors to our area.  A guidebook of the period describes our town as follows: “The situation of the village is well adapted to those who require either sylvan or marine scenery, it being on the borders of the New Forest and one mile from the sea shore”. 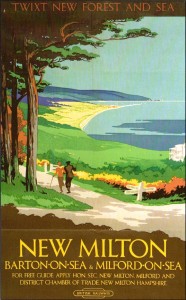 Thanks to the London and South Western Railway, and Mrs Newhook of the Post Office our town was born and named New Milton.  We have made considerable progress since that first building in 1886.