The below conference may be of interest to you. The subject of this conference is how buildings and structures have shaped, and themselves been shaped by, the Forest.

You are invited to attend our free exhibition of the WW1 military flying school at the East Boldre, Beaulieu Airfield, with some recently discovered, exciting new material. We have enhanced our exhibition to include the WW1 military hospitals at Brockenhurst, which treated many of the pilots injured in flying accidents at East Boldre. After his second crash, Sergeant Arthur Simmons spent several weeks in hospital where he took a number of photographs which we have restored and added to our collection.

During 1916, Corporal Gordon Tucker was an aircraft rigger at East Boldre. He later moved to airfields in Hounslow and Wye where he continue his career as an aircraft engineer. During his time in the RFC, he kept meticulous pocket diaries of his experiences, the repairs he made to aircraft, his run-ins with superiors, the food he was served, his romantic liaisons and the many flights he took. His letters and diaries are the most extensive record found to date, of the day to day life on a WW1 military airfield.

Recently, his sons, Michael and Stuart Tucker, have made their father’s memorabilia available. Michael Tucker, age 84, who has transcribed his father’s diaries and letters, has flown from his home in Australia to be present at exhibitions at Hounslow, Wye and here at East Boldre. He will bring a range of WW1 memorabilia, including his father’s uniform, diaries, documents, photographs and medals. His 90 year old brother Stuart, who lives in Surrey, is currently unwell but we hope he can also be here.

At 11:00 am on Saturday 27 July, we will formally thank Michael and Stuart and present them each with a signed copy of our book, ‘From Forest Field to Western Front’.

In addition to the photographs and the Tucker diaries, the exhibits will also include the New Forest National Park Authority’s mobile WW1 exhibition and stands for the Milton Heritage Group (Friday and Saturday) and the East Boldre Painters Group.

At the same time, the latest designs for the new East Boldre Community Hub and Community Shop will be on display in our new Robert Coles Room, and there will be someone on hand to answer your questions.

We look forward to seeing you if you can make it. 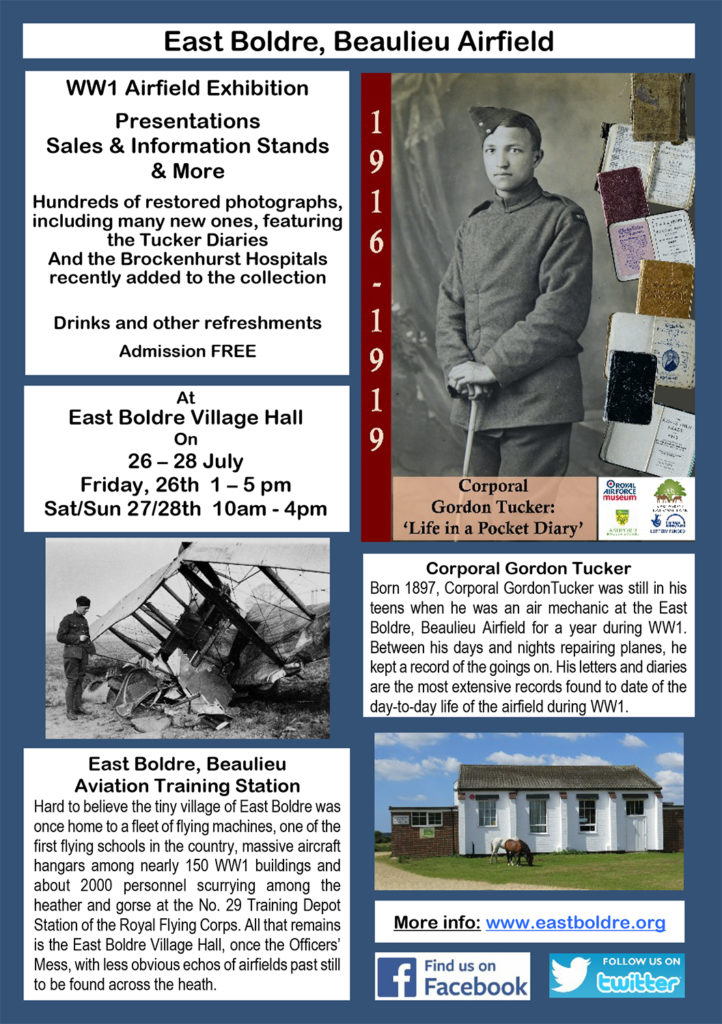 Please have a look at the attached information. It is an opportunity to attend a free conference at Bournemouth university on the history and archaeology of Hengistbury Head.  Day one on Saturday 6th of April 2019 is based at the University with a variety of speakers. Day two, on Sunday 7th, is a guided walk on Hengistbury head led by leading academics in this subject.

This looks to be a fascinating conference on the early history of the area to our immediate west and by extension our own history.

Dear MHS members.
We have been contacted by Mr Brice Stratford of Lyndhurst who is compiling a book of New Forest folklore. He is appealing for help and is very keen to obtain information from locals with regard to this topic. He is hoping to publish his book at the end of 2019. If after reading his request you feel that you have something that you can contribute please note he needs the information by the end of February.
Regards
Nick Saunders
Chairman.
Milton Heritage Society
New Forest Folklore Call Out
Hello MHS members
The below link will take you to an Historic England page where a WW1 memorial to Australian troops has recently been rediscovered on Salisbury Plain.
https://historicengland.org.uk/whats-new/research/rediscovering-australia/?fbclid=IwAR2tnhYOoYxGo8xP6OmPT0Iu88FDzgyXU5gihqPKlauHmKm1B9qpiRmyBlA
Regards
Nick Saunders
Chairman
Milton Heritage Society. 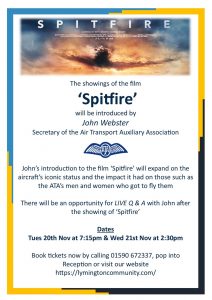 These talks will take place at The New Milton Memorial Hall commencing at 7 p.m. on the dates below:

14th September. Lyndsay Stride, a New Forest Commoner from a traditional commoning family, is a Trustee of the Foundation for Common Land who is also working in education & interpretation and currently co-ordinating a project called Commoning Voices.

At this meeting there will also be a short AGM of the Milton Heritage Society.

The life of David Balme. The quiet naval hero.

David Balme was the 20-year-old sub-lieutenant who, in 1941, boarded a German U-boat in mid-Atlantic and captured an Enigma machine and a treasure trove of intelligence material – one of the greatest secrets of the Second World War.

Although best known for this ‘secret capture’, Balme also had an active naval career in WW2 – on convoy escort duty in the Battle of the Atlantic, flying Albacores over the Western Desert at El Alamain, and becoming senior Fighter Direction Officer with the Eastern Fleet to secure victory over the Japanese.

This talk by Ray Mayes will follow the life of Lt. Cmdr. David Balme DSC until his death in January 2016 and consider his role in history – should he have been recognised with a higher honour?

9th November. Nick Saunders. 1918. How the final year of the Great War affected our community.

This talk will review how WW1 and the events in 1918 played a major impact on our district. 1918 saw the highest number of casualties in a single year for the whole war for our town. It will also look at the bigger picture of world events in the last months of the war, some of which have shaped the world we live in today.

There will be no speaker in December.

John researched and wrote about the origin of his family name for many years and began talking to groups about family history. This led to him to become aware of our interest and concern in ancestors to the extent that we neglect our own stories and those of our families.

Are we relying too much on digital media? What will our great-great grandchildren know about us . . . ?

The New Forest today is a haven of peace and tranquillity for many, both residents and visitors. This presentation is an overview of the twelve New Forest Airfields in WWII, including their purpose, genesis, locations, types of airfield, squadrons and aircraft stationed hereabouts and their uses, with particular emphasis on the D-Day period in June 1944. The PowerPoint presentation will be accompanied by a commentary and personal stories of the servicemen and women who took part in this remarkable period of local activity.

Dr Henry Goodall is a retired Consultant Occupational Physician, with a lifetime interest in aviation, who became interested in the New Forest Airfields, on moving from Southampton to the New Forest in 1995.

He is Chairman of Trustees of the Friends of the New Forest Airfields (FONFA), who opened a new Museum to the public at Bransgore, in May 2016.

He served briefly in 10th Btn (TA) of the Parachute Regiment in the early 1960s, and is a member of Pathfinder UK, with whom he has carried out six commemorative static line parachute drops from World War II veteran Dakota and other aircraft, in France and the Netherlands, in addition to five training jumps, over the past four years.

A factual and occasionally amusing look at Policing in a bygone generation.  Initially in the Borough of Christchurch, and latterly in other county towns of Hampshire.

Police cars from the past – burglars who ‘catch themselves’ – ‘False phone callers’.   These and other stories will be highlighted by our speaker.

If you have an interesting subject for, or are able to give a presentation on local history or heritage in the Parish of Milton and district, then please contact the Milton Heritage Society Speaker & Events Secretary, Clive Rigden via e-mail: clive@rigden.net or telephone: 07 860 526 679.

This is to let you know that there are two aviation talks at East Boldre Village Hall on the evening of Friday 29th of June. See below for details.

The Silver Dart and the First Flight of the British Empire
By Hon Col Gerald P J Haddon, RCAF (Rtd)

Gerald Haddon will unravel the fascinating saga of how his grandfather, J A D
McCurdy of Canada became the first person to fly in the British Empire in 1909. One
hundred years later, Gerald helped replicate both the Silver Dart and the experience
from the same setting near the estate of McCurdy’s associate, Alexander Graham
Bell. The success of the Silver Dart was instrumental in McCurdy’s building the
Curtiss Jenny, in his establishing the first aviation school in Canada and in
encouraging the large number of Canadians who came to RFC Beaulieu Training
Station in East Boldre to learn to fly for the Great War.

Charles Rolls (co-founder of Rolls-Royce), along with Drexel and McArdle from East
Boldre displayed and flew their aircraft at Britain’s first International Aircraft Meeting
in Bournemouth in 1910. Rolls, one of the first to order a Wright aircraft, built under
licence by the Short Brothers who created the first specific aircraft factory in Britain,
was the first person to complete a nonstop return flight across the English Channel in
June 1910. He died one month later at the Bournemouth Aviation Meeting in the
country’s first fatal aircraft crash.

Wine and refreshments will be served during the interval

£5.00 per person at the door to include a glass of wine on entry